What makes Bjørn de Vil's shows special are his daredevil artistic and juggling acts, combined with a relentless public participation.

As a warm up he is performing a one and two diabolo act with virtuosity, enriched with driving music. After that he shows a wicked and dangerous juggling act with an electric hedge saw, a 14 pound bowling ball and a raw egg. The highlight of the outdoor show is without question the highly risky mount on a slack rope (held by volunteers) to the top of the world's only existing Five Wheeler . Four metres high up, Bjørn de Vil shows an original act with a little safety umbrella while playing a saxophone accompanied by background music or also a poiswingung performance with huge flags. With his lively risky show, Bjørn de Vil is a big spectator magnet. Crowds up to 300 people is nothing out of the ordinary. There is hardly a street performer who involves more volunteers into his show than Bjørn de Vil. 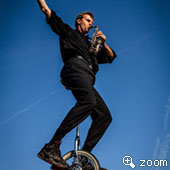 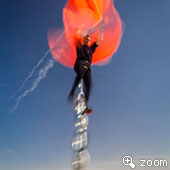 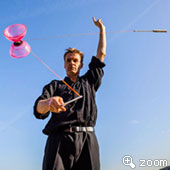 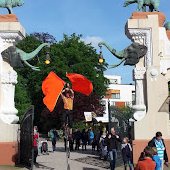 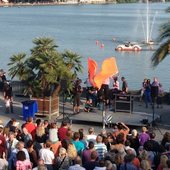 The big strength of Bjørn de Vil is his unbelievable versatility that comes out on stage very well. He combines the entire range of various stage programs to a single diversified show.
Bjørn de Vil combines his spectacular diabolo tricks or his bowling ball, electric hedge saw and egg juggling act with the finest comedy. A fast-paced glow- or fire juggling from the world of a sparkling vaudeville show or on stages where the ceiling is at least 4 meters high, it is possible to bring in parts of the outdoor show, for example the Five Wheeler Act. The Stage Show can also be combined with sections of the Magic Show or the Scorpion Show. 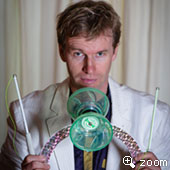 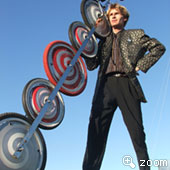 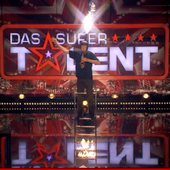 Whether for warm summer evenings or for cold winter nights; whether for mediaeval markets or as the highlight of an unusual event. The playing with fire during the show always fascinates again and again.

Bjørn de Vil does not take long to ignite everything with his blazing torches and flickering "diabolos" . The burning devilstick with flying fire leaves light traces in the darkness. Will Bjørn de Vil be capable to balance the longest torch in the world on his chin? And does the volunteer let the burning torch disappear into his trousers? Under his spark spreading fire helmet the torches spin in three metres hight on the Five Wheeler or Russian ladder to the sound of bombastic music. Let`s fire... 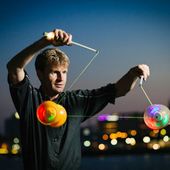 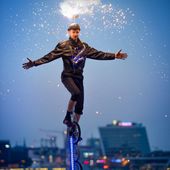 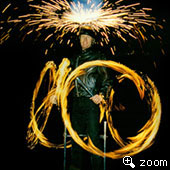